The message of The Christmas Star! 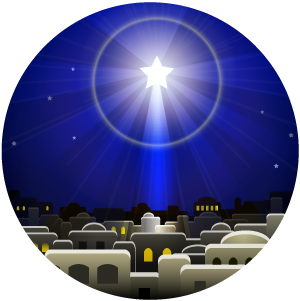 The message of The Christmas Star

“He came to that which was his own, but his own did not receive him. Yet to all who received him, to those who called on his name, he gave the right to be called children of God”!
John 1: 11-12

This does not mean that everyone chooses salvation but that everyone has been invited by the creator to achieve salvation. We have been given a choice and free will. He gave us his love freely, but his salvation comes with a price. The price is to return that love and that respect back to him. This is sometimes a huge responsibility but it need not be looked at like a burden. In fact Christ described his path as a light burden. Difficult sometimes yes, but not impossible. He gave his light unto the world! The star was an outward sign of the light and love he came to give to the world. The star was a sign of the salvation he offered to all mankind. Those who follow him are spiritual Israel! The star tells us that He has given us all the opportunity and chances to see him and choose him. The star says that he gives us all his guidance. It tells us that all people not just those who are “saved” are in this life in touch with and are part of the presence of God. We all walk in proximity to his spirit, and we all need to find a way to walk his path! The star tells us that he is here right in front of us, and that if we have the courage to truly look and seek, that we can and shall find him! The message of the star tells us that He loves us all, even those who are “lost”. The message of the star says unequivocally “peace on earth and great joy to all whom on God’s favor rests”! The star tells us to desire peace, and to have hope, to seek his light, and to indwell within his love! The star tells us that He is here with us surrounding us and guiding us if we just let ourselves be aware of him. The star sings to us with the angels “Hoshana (hosanna / praises) Hoshana to God in the highest, Emmanuel has come”. Emmanuel means “God with us” and is another name for Yashua. The star proclaims this truth, that indeed God is here with us. He has given us so many resplendent gifts, and everything can point to him if we just let ourselves see it that way. The star is a message of hope; of light in the darkness. They say it is always darkest before the dawn and that too is the message of the star. We should never give up hope. Hope holds all the other virtues in balance. Even the greatest virtues of love and faith are anchored by the presence of hope. This is the message of the Christmas star. Hope came and dwelled amongst us, and even though He ascended He has never left! The star of the hopes of all mankind led the magi to The Christ child and shone down on him pointing to the true north of the universe. The star is the light of hope and that is the truest of all its messages! Some said the star was really an angel, some people say it was an “angelic star” which is a type and form of angelic energy, some modern people try and pass it off as some type of other cosmic event like a comet. Well the truth is that it really doesn’t matter what the star was, but rather what it told us about life. The message of the star which is the real Christmas gift is Christ who tells us that HOPE IS NEVER FALSE! GOD IS WITH US! SALVATION CAN BE YOURS!
Posted by Rev. Lucien O'Corvi; The Shamanic Minister, A Voice in the Crowd! at 8:09 PM