I am pleased to have been asked to participate in another blog tour. As before, this blog tour is hosted by Tams Two Cents Book Blog. So … The O’Raven Chronicles is proud to present The Viper's Creed Blog Tour for Author T.L. Shreffler. 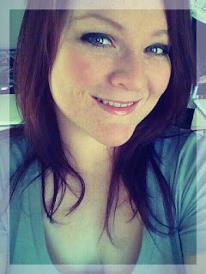 Author bio.;
Ms. Shreffler is an author and journalist living in . She loves diversity, fantasy, romance, iced tea, long walks, philosophy and thrift store shopping. She currently holds a BA in Badass (Creative Writing) and her poetry has been published consecutively in Eclipse: A Literary Journal and The Northridge Review. She is the author of two published series, The Cat’s Eye Chronicles (YA fantasy) and The Wolves of .

She also puts her creative talents to use as a graphic designer, painter and illustrator. By day, she works as the assistant editor for Tinsel Tokyo Magazine, a fashion magazine specializing in the LA underground art scene.

"T. L. Shreffler definitely has a writing style that I love to read and the ability to draw me into her world with an ease that I don’t find often. She manages to find the balance that so many other writers don’t achieve in their work, scenes were neither over written nor understated and I enjoyed every page. I was eager to reach the end to learn the outcome but at the same time I was sad for the story to be over." - Lindsay and Jane's Views and Reviews 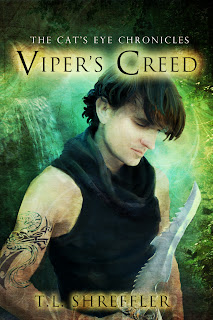 Sora is having visions. Strange, terrifying visions brought on by her Cat's Eye necklace, an ancient and magical device. Spurred to action, she leaves her mother's cabin to find Crash, the mysterious assassin who once changed her life. She is certain that together, they can discover what the necklace is trying to tell her.

Crash is still on the run from the dark sorcerer, Volcrian, but now a plague is spreading across the land. Volcrian's quest for vengeance has awakened something far more evil than himself; a force that could destroy the entire kingdom. Together, he and Sora must harness the power of the Cat's Eye and kill the sorcerer before it's too late....

“……Towards late afternoon, the city made its first appearance. It began as a small speck, then grew rapidly in size as they neared, spiraling towers stretching up towards the sky. The closer she got, the more ornate the walls appeared; they were limestone yet painted with curving, swirling shapes, as though gusts of wind had solidified into rock. A gentle chiming met her ears. The closer they came to the city, the louder the sound grew.

The wind blew again and she saw glints of metal flash in the sunlight. Perhaps thousands of small, metallic shapes were hanging from the large wall—wind chimes? She squinted. The wind blew again. Yes, wind chimes—perhaps hundreds of them, dangling from every available surface. Charms and baubles swirled and danced in the light. With each gust of wind, glorious sound cascaded through the air, shockingly akin to music, a wondrous cacophony that made her jaw drop, mouth gaping in amazement. It must have carried for miles across the plains. Perhaps even more shockingly, it was pleasant to the ears; not a chaotic splash of noise, but a soothing rush, ebbing and flowing like a passing river.

She stared in fascination, then her eyes traveled to a large building that towered above the walls of the city, jutting up like a giant, spiraling seashell. It was dome-like in structure, with towers and scaffolds, the roof tiled with a swirling mosaic of brightly colored stones, lime greens, deep purples and brilliant reds. She recognized the golden emblem perched on top of it, spinning on a weathervane. This was it—the Throne of the West Wind.

“They founded the city here because of the intense winds,” Burn explained, following her eyes. “Something to do with the land formations. The winds here never stop, and at certain times of the year, it can be deadly. They say entire houses have been uprooted from the ground.”

Sora nodded, too shocked to say anything. She imagined an entire house being lifted into the air. She had noticed the weather; the breeze faded at times but never disappeared, blowing dust and pollen in her eyes.

The city grew larger and larger. She couldn't believe the size of the walls. They were built of a dull gray stone that was obviously native, an extension of the surrounding bedrock. She could see where an older section of wall abutted the hills east of the city. She pointed them out to Crash. “It looks like the walls were rebuilt at one time,” she said, indicating the brighter, newer stone.

Crash nodded, though he seemed distracted by his thoughts. “This city was a fortress once, back in the time of the War. It's been destroyed and rebuilt several times. These walls are hundreds of years old.”

“Aye,” Burn called, overhearing their conversation despite the racket made by the bells. “The sewers run through the buried streets of the old city.”

Sora looked back to the walls with renewed interest, swept up in her imagination. She pictured a fortress smashed by magic, leaping flames, shining weapons, siege engines and war…..”

Between The Bind  http://betweenthebind.blogspot.com
10-26-12.. Interview & Excerpt

Posted by Rev. Lucien O'Corvi; The Shamanic Minister, A Voice in the Crowd! at 3:00 AM