Jericho; a poem by Rev. Loush 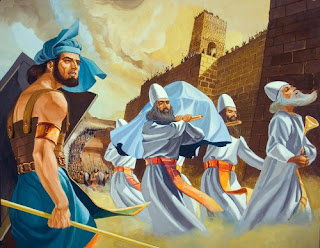 People have always told me how stupid I am,
As if my birth were seventh sin.
They told me I was born to loose,
As if I had no right to choose.

Last night I dreamed a city of sin,
With sky high walls and a roof of tin.
A nation of people about to give in,
Till a trumpet voice sounded in the midst of them.

Shouts, songs, and battle cries arose from the crowd and ascended on high
They circled the city and the walls caved in, and tumbled down not to rise again.

Shouts became silence; a deafening sound.
Ruins laid on soiled ground.
The crowds began to gather in.
A beautiful man emerged from them.

“Don’t let other voices define who you are,
find your own song, follow your star…”

I’ll never forget what Joshua said.
When I lose my lyrics his words ring in my head.

“…Raise your voice, and let the walls come down.
Jericho’s just another town.
Today is just another day.
One more step along the way”!

Sometimes I fall but I rise and mend.
Often I struggle to breath again.
It gets hard to take it; take it all in.
You are what you eat, so I swallow my sin.

I walk, I fail, I work, I strive, I sweat and bleed to stay alive.
I cry, I sleep, I wake again, God only knows where I’m going,
But I know where I’ve been.

Short life or long, if I’m right or I’m wrong,
I will find where I belong, and I will stand and be strong!
I’ll do what I do, and say what I’ll say,
And after it’s over I’ll fly away; far away.


Not in someone else's shoes, not on someone’s terms.
I’ll live, and love, and learn, and loose.
But I’ll do it as I damn well choose!

And after all this time, and how I’ve paid,
I can hear God’s voice in what I say.
And Joshua’s words echo as I pray,
For another day; just another day.

“…Raise your voice, and let the walls come down
Jericho’s just another town.
Today is just another day.
One more step along the way”!

Inspired by various things in the movie “Raise your voice” with Hilary duff, and a song in the new movie version of hairspray with Queen Latifah.
Jericho a poem by Rev. Loush M. O’Raven,
on the 2nd of may, in the festival season of Beltaine, in the year of our Lord 2009
Posted by Rev. Lucien O'Corvi; The Shamanic Minister, A Voice in the Crowd! at 6:29 AM