I want to personally thank Elle Flanders for having the courage to make this film, to tell their story, and stand up against the bigotry that has appeared in this country since 9/11. I want to thank you for reminding us that no issue is one sided. Jewish people are not always victims, and arab people are not all terrorists, and love can and sometimes does exist between these two peoples. I want to thank you for standing up to the people who have called you anti-semetic and saying No I am not! I do not believe for one second the Elle is an anti-semite. I believe that she told two stories of destroyed love, which reflect a war torn section of the world! I believe that there is hope, that jewish people and arab people can demonstrate the very best of human nature, and that one day they will. I believe that children on both sides will lead the way to a better tomorrow, and I want to thank Elle for rekindling my hope for the future once again! Your film is an inspiration because it is four peoples truths! These four individual truths can help show us all THE TRUTH! And after all The Truth shall set us free!

Bright Blessings! And Bright Hope for the future! 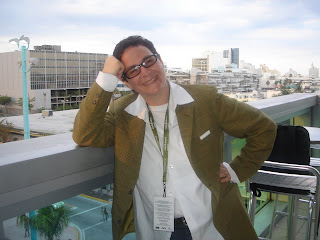 Elle F.
Posted by Rev. Lucien O'Corvi; The Shamanic Minister, A Voice in the Crowd! at 9:59 AM